Author(s): @anthonyb.eth (on behalf of the Index Coop Council)

The Index Coop Council (ICC) has created a Safe as a simple way for INDEX holders to delegate to the Council as a whole. The ICC will vote as a bloc with any delegated tokens.

The idea of delegating to the ICC began with 1kx and Set Labs’ Open Letter in which @setoshi said:

“1kx and Set will delegate significant amounts of INDEX to product and growth leaders within the community that are best aligned with this vision to empower them.”

Following this, a forum post authored by Set and 1kx representatives, INDEX Delegation Intentions and Next Steps, outlined their view on delegation. Feel free to read through the forum post to see the principles behind their delegation.

“that a delegation of votes is shared evenly across all members of the ICC so that we each face each other as equals, but with the responsibility to follow through with what we collectively decide is the right direction forward.”

Eventually, the votes were delegated to each individual on the ICC, however, due to some technical complications, the votes were not split exactly evenly. To be clear, this was not a fault of anyone, only made problematic by the cumbersome way we decided to accept the delegation. In addition, it became apparent that it would also be easier to update signers rather than reshuffle delegations as ICC members came and left.

To make this process easier moving forward, the ICC has created a Safe which is composed of four Index Council members as determined by IIP-164 with a 1 of 4 signing structure. This Safe will hold no funds and will only be used to vote on the Index Coop Snapshot Space. The ICC will vote on IIPs and metagovernance votes.

It should be noted that this delegation mechanism is not a departure from the current model, but it is a way to make it easier for interested parties to delegate to the Index Council who’s views closely align with the contributors at-large.

If you need additional guidance you can view the Snapshot Docs 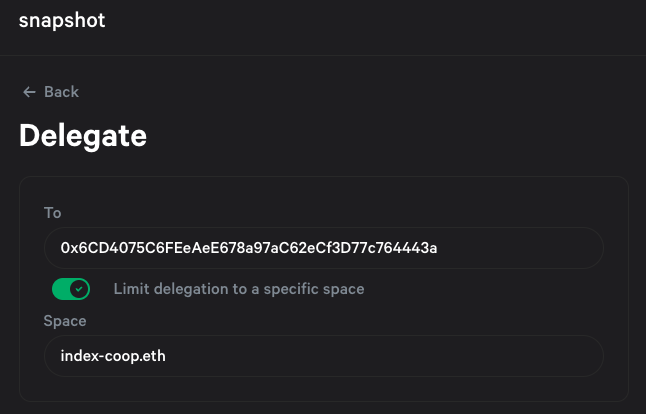