A review of the current state of our liquidity for different products. This follows on from the July review

I see no reason to make any changes. 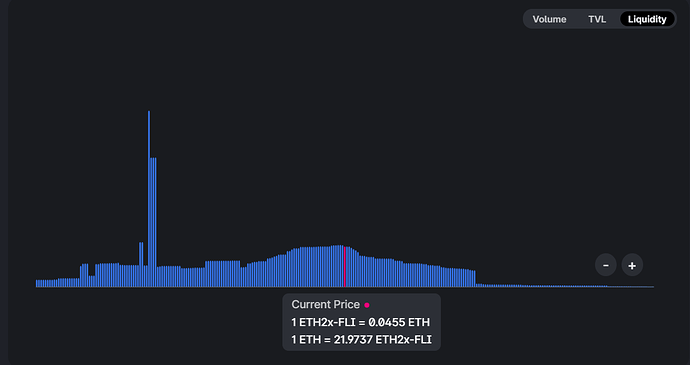 I don’t see a need to change any liquidity incentives, but the low income for LP’s is a concern for liquidity depth.

The Uniswap v3 pool has gained some AUM, and volume.

However, this is a very tight position and only captured 15% of the trade on Sushiswap. 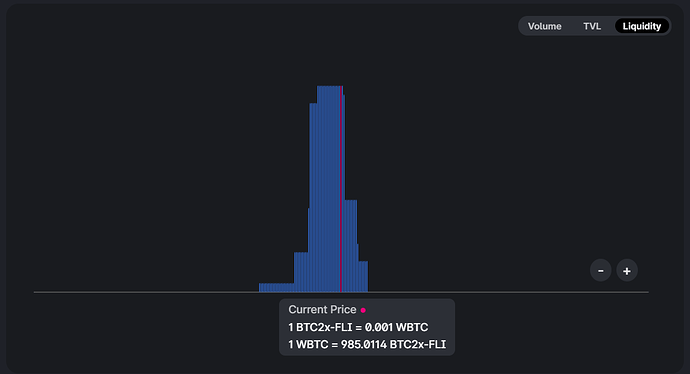 DPI (Data to the 4th September)

TLDR
We have loads of DPI liquidity in multiple pools.

In August the v2 liquidity mining stopped and we started a short campaign on v3.

I see no need for further incentives on DPI liquidity.

As expected we saw liquidity migrate from v2 to v3 with growth in the sushiswap pool as well. 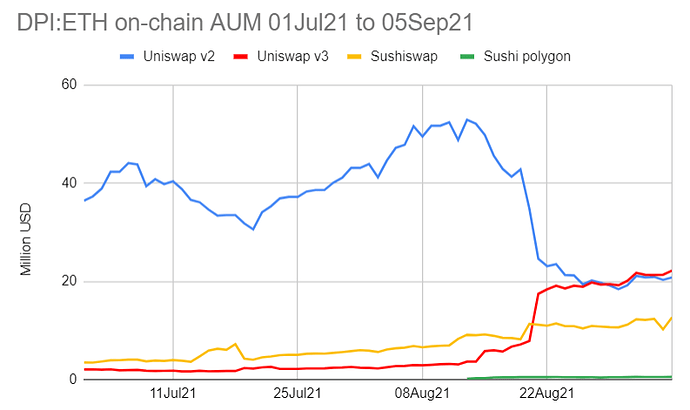 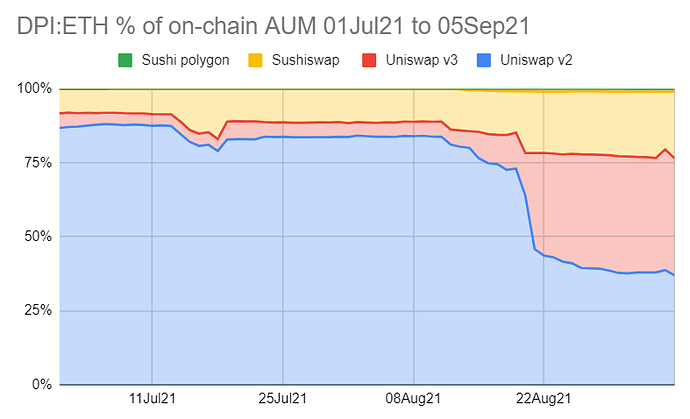 Daily trade is very variable, but we have seen more moving to v3 (taken as a rough indicator of where the bets depth is). 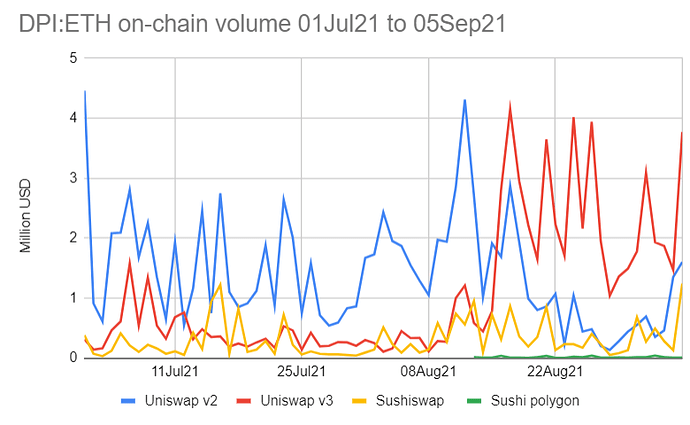 THis is best seen as a % of each days volume: 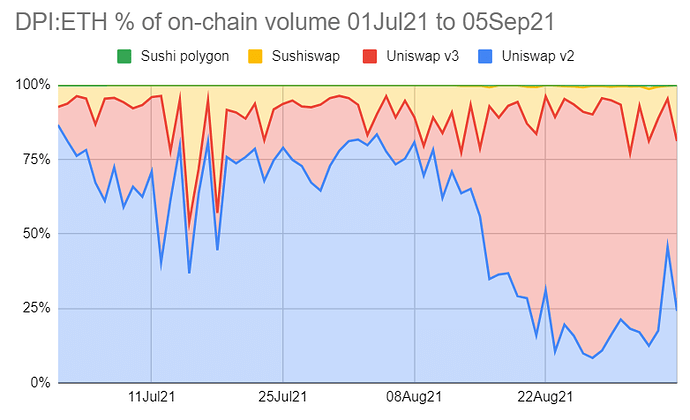 If we calculate LP income (using spot prices for INDEX and SUSHI) we see that incomes have dropped for all, but v3 generates the highest total reward (on average before Divergence Loss which is likely to be higher on v3) 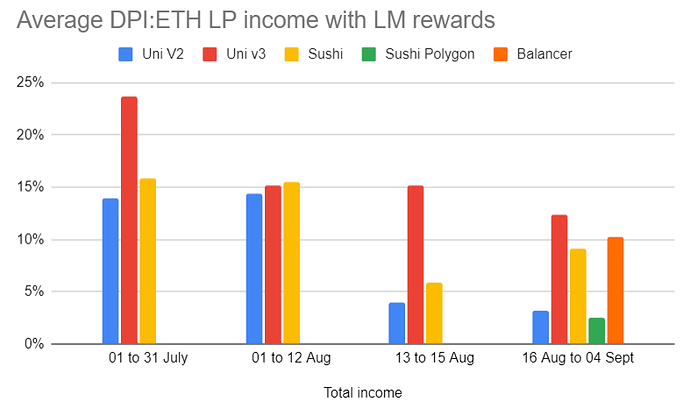 Note, the Balancer pool collects BAL rewards, but includes exposure to wBTC as a 3rd token. 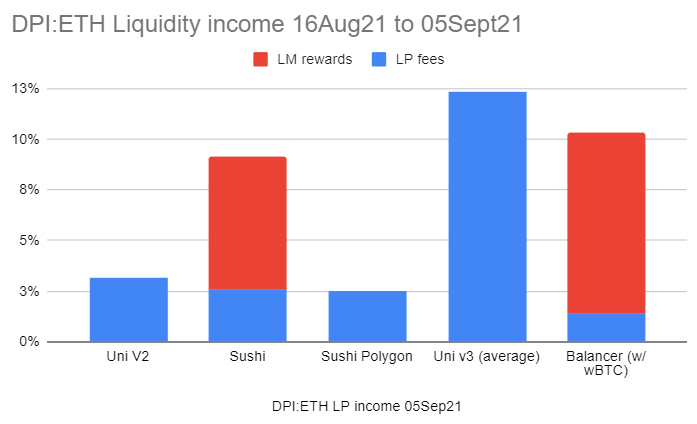 Note the FEI:DPI pool has a larger risk of Divergence loss. 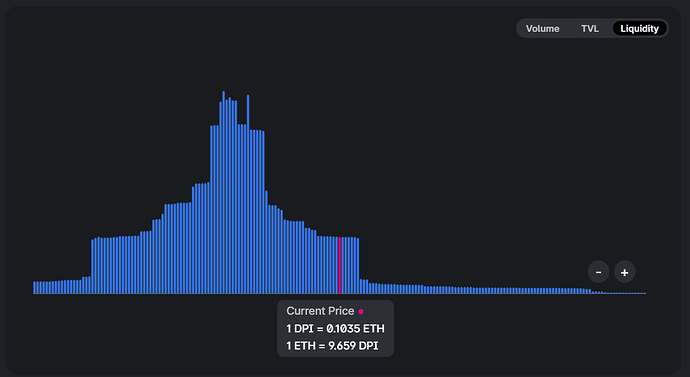 This has been approved by INDEX holders and is awaiting a farming contract to be deployed by the Sushiswap team.

MVI is currently enjoying liquidity mining with 3,286 INDEX over 30 days as per IIP-62.

Due to delays in getting the staking contract topped up, there was about a week with no rewards on the contract. During this period, a number of LP’s moved to the Uniswap v3 pool and captured higher LP fees. Some of this returned when LM resumed.

In addition, Sushiswap has started Onsen Rewards for MVI:ETH on polygon with SUSHI and MATRIC rewards. 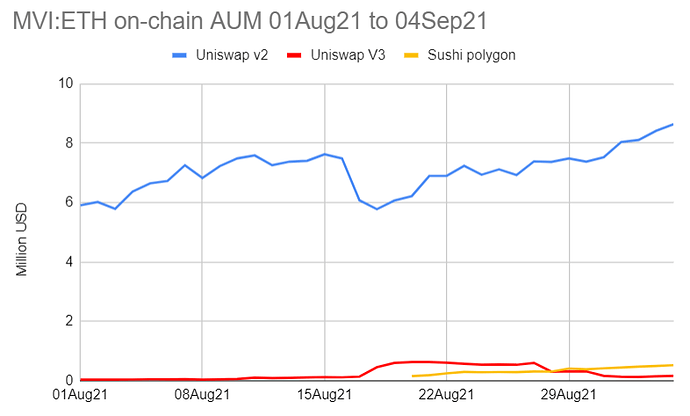 MVI liquidity as a % of total 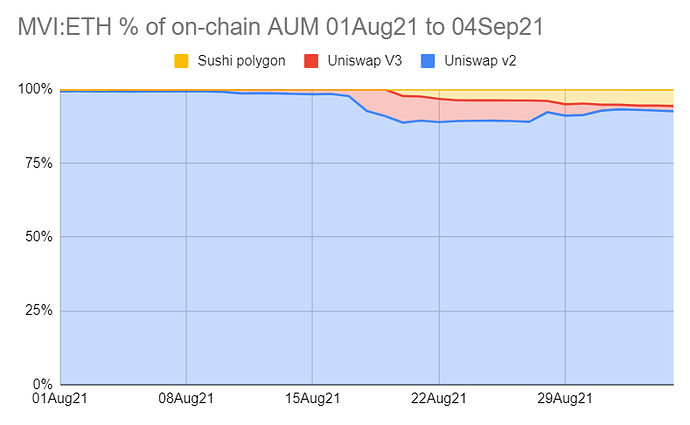 In terms of volume, most has stayed in the v2 pool: 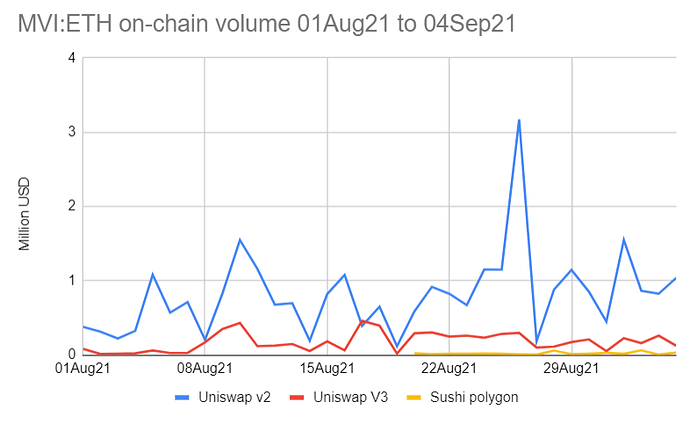 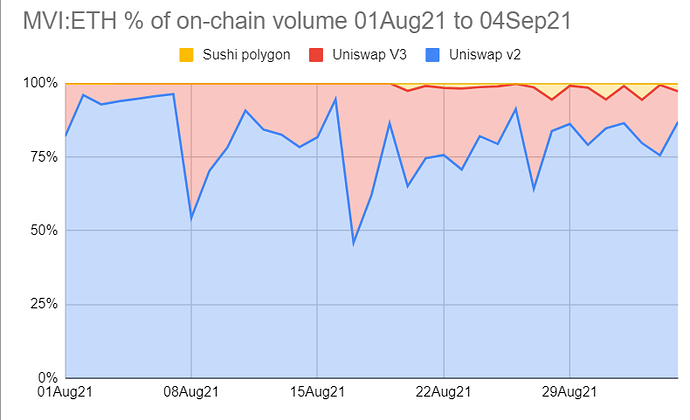 Overall the v3 liquidity looks like this, which I think looks pretty good for a small pool with some LP’s being focused, and some being wider / very wide. 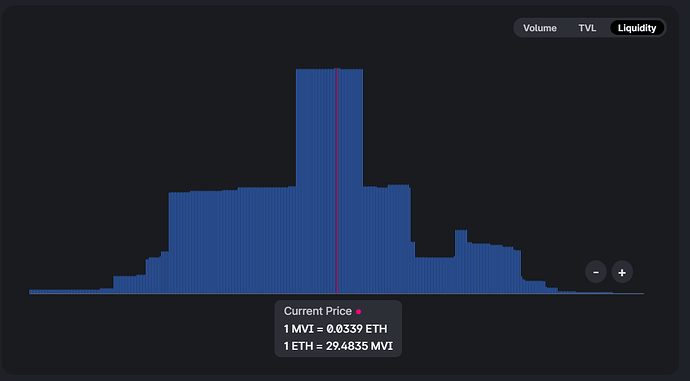 Since the v2 contract was refilled, the average income for LP’s has been: 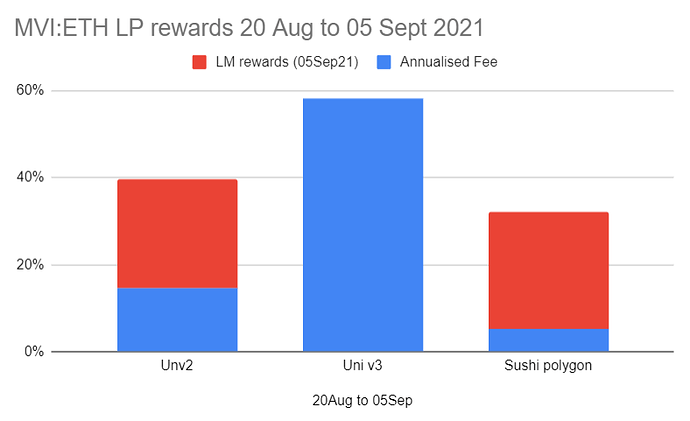 In terms of current market depth, Uni v2 is giving the most depth, but the v3 is obviously much more capital efficient (28% of the volume, using 2% of the capital.

On additional data point for MVI: 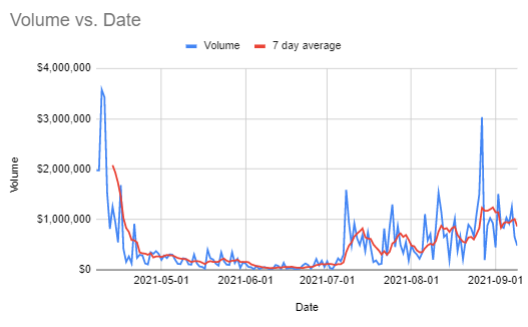 Good to see more liquidity living on Sushi. I wonder if you have any thoughts on the overall result of the Onsen program for 2x-WBTC. In my eyes it seems to have done a good bit to keep a decent amount of liquidity for 2xWBTC but not enough to jump-start strong organic growth.

For BTC2-FLI, I would say that the Onsen rewards are helping the pool maintain depth and I suspect we would see less AUM in the pool if the Sushi rewards stopped. Infact, I would say that without Onsen, BTC2-FLi would be short of liquidity.

I would certainly agree that the current rewards are not enough to grow BTC2-AUM. However, we know LM is a poor (/expensive) tool to grow AUM. More detailed analysis of the daily / average volume and comparison to the issue and redeem volume may give us a better idea of what is happening.

One thing to remember is we don’t expect AUM to grow like the sector products, we would expect the leveraged product to grow units when people are bullish and reduce when people are bearish. In a prolonged bear market, AUM will trend to zero, and I personally see no problem in the liquidity doing the same.

OK, With the end of Liquidity mining, all eyes are on MVI and whether it migrates to Uniswap v3.

Current liquidity is as follows 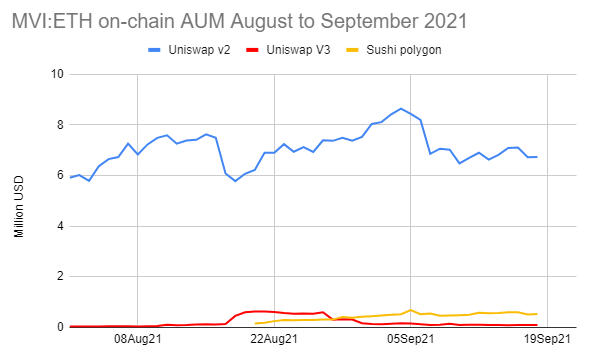 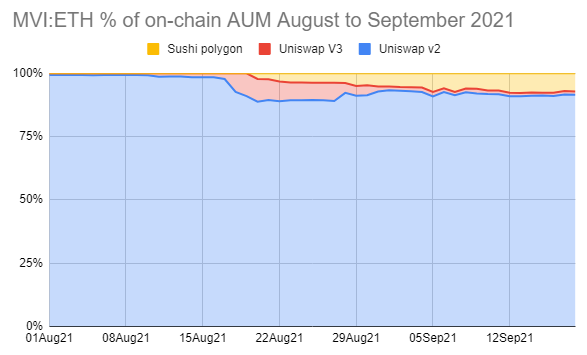 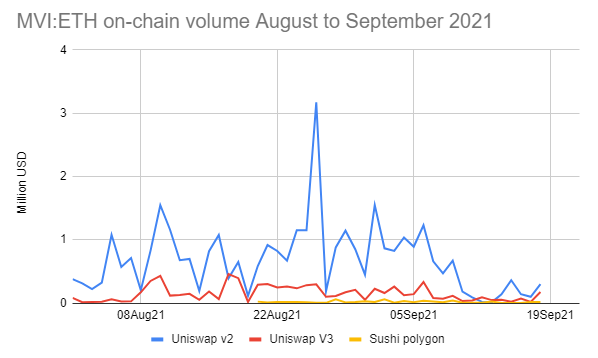 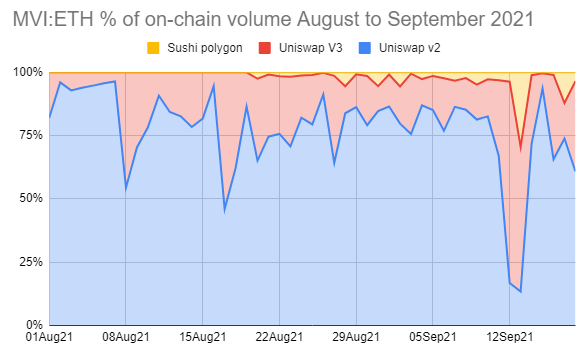 Income for LP’s(including the INDEX rewards for v2) 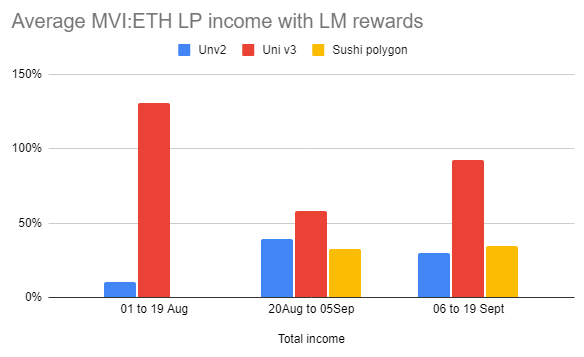 The key criteria is the pool depth for trades:

Main net is the key as that is where the issue / redemption arbitrage will occur and so influences the premium / discount to NAV.

My google sheet can be found here. 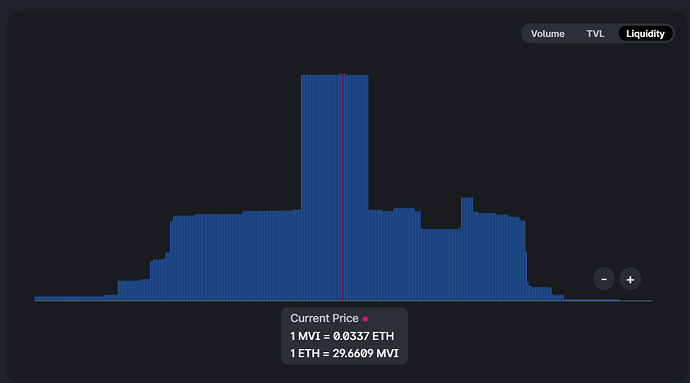