Personally I’m not sure if I’m really qualify to nominate myself. Simply because I’ve just been in the Coop for only 2 months. But by looking at the KPIs stipulated above, it really does resonate with me and I feel I can really add value to The Index Cooperative to that.

I’m aware that there’s a lot more community members out there that I feel could do a better job then me. Which I guess this is my INTJ in me speaking.

Thus I’m just posting here to express my interest on this role. Maybe not this term and perhaps the next. But would love to add more value, add my unique perspective & approach plus facilitate further growth of our DAO through the Funding Council.

But unless there is support to my nomination, I won’t put myself in the ballot. And will be supporting whom ever I feel can give the maximum impact to the Coop.

Confirming I have set up the FC + 1 election up ready to commence:

Note a slight process change. When the election launches, everyone will be automatically sent their voter information and a sign in link via the email address they provided in the Community Member List.

If people aren’t on the list, and/or didn’t receive an email, just message me on Discord and I will enroll you to the election and provide you login details.

From a practical perspective, it makes sense that the working group lead with the deepest understanding of our balance sheet has oversight over these decisions.

From a decentralization / autonomy perspective, it makes sense to start to transfer this kind of decision-making to the TWG.

Since the funding council will be moving to an even number. I would like confirmation from @gregdocter @dylan or @DarkForestCapital that there are processes in place to resolve 2-2 voting ties to insure that a deadlock will not halt essential coop business.

Great to see this and would also suggest this growth is not from 3 to 4 but from 3 to 5 members.

I would be very happy if @fallow8 @Pepperoni_Joe and @Matthew_Graham took the seat in this 1 or 2 roles.

@Matthew_Graham & @fallow8 are my nominations.

Agree with @oneski22 & @DevOnDeFi for a 5 member FC. If not implemented this time around then a roadmap to 5 would be appreciated.

I believe the current status quo is already 4 right? Based on this quote… if that’s the case we only would need to nominate one in order to reach an odd number.

While this is in regards to the Wallet signers, is it different than the FC?

If the above assumptions is true then we would only need to add 1 member.

But I do agree with @oneski22 quote below

Perhaps moving forward, when the expansion of FC. It would be from 5 to 7.

With that being said I would concur with @afromac nomination of @Matthew_Graham for a spot in FC.

Qomarcrypto has it right, this is the vote to add one more ‘Decision Maker’ and the signatories remain 2/3 on the FC wallet (pending IIP-69 passing, nice). The roadmap will be to onboard more IC contributors as DMs and over time transition those people to signers, we then have the choice to either replace the current 2/3 signers with newer members, or jump to odd numbers each time for example a 3/5.

Great post and awesome to see the FC expanding. I tend to agree adding two rather than one person seems to be a better way forward.

Thanks for the nomination @DevOnDeFi.

The Funding Council has the potential to become a model for how DAOs can achieve rapid growth and financial sustainability. If run correctly, it can enable transparency, accountability and success at Index Coop.

Some steps we can take to get there are outlined in the Funding Council of the Future proposal.

Why I think I can help the Funding Council…

I’m hoping this operational understanding of how the FC works, coupled with the strategic vision outlined in “Funding Council of the Future” gives the community a good idea of what I would hope to achieve as a Funding Council nominee.

Edit - also agreeing with @Matthew_Graham and @oneski22 RE the need to have an odd number of members of the FC. For transparency also noting that presently @puniaviision has priorities elsewhere and so has basically zero input into FC decision making.

Going quickly, so these are very rough estimates for me - you might see some edits as I reflect

Quarterly (these are hard to estimate)

Now, whoever is added should helps improve every aspect of the Funding Council such that it is more efficacious and more efficient to the Coop’s benefit. Growth & Improvement

Looks the following 3 have been nominated thus far

Just calling out that nominees should validate here that they want to be nominated before we officially put them on a ballot. So far, unless I missed something, only @Pepperoni_Joe has confirmed that he would take on the role. @Matthew_Graham seems interested but wanted more information (which Greg provided). I know that @fallow8 is pretty slammed and might not even realize he’s been nominated.

Yep this is very valid. I’ll do a round the houses after the nomination period ends to confirm who actually wants to run and update the thread going into the voting period.

I would relish the opportunity to help the community proposer.

All, just wanted to update here after telling @Pepperoni_Joe that I appreciate the nominations and it’s something I’d be interested in for the future, but that I really want to focus on getting Institutional Business set up right in this quarter and the balance of the year so declined the nomination.

Hey all,
Elections have concluded and @Pepperoni_Joe has been selected as the next member to serve on the Funding Council. Congratulations to PJ, and thank you to everyone who participated by casting your vote. 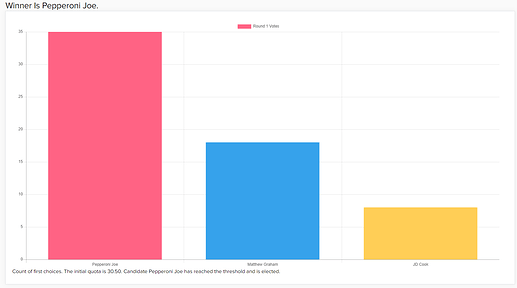