Using this as a confirmation of a mutual understanding that the terms of “off-boarding” may change due to the realities of engineering, I will be voting FOR this proposal.

Thomas and Kiba are starting a company that one day may become huge across the data economy space.

@puniaviision Thank you for the vote of confidence!!

I hope that both parties can be patient and flexible when it comes to working with a DAO.

Like many (maybe most?) members of Index Coop, this is my first time working in and with a DAO.

Reflecting back on the past 3 months building DATA with the Index Coop community, there are lots of things I would have done or said differently. I wish I had been more patient and empathic in multiple instances.

I hope to take what I’ve learned over past 3 months to work collaboratively with the Index Coop community to make DATA a successful product that creates a win-win for everyone involved.

I understand community concerns over the exit clause, that was negotiated between WG coop leaders x Titans of Data, but it’s a strong yes on this proposal from me. @Thomas_Hepner & @Kiba have demonstrated their intent, through proof of work, to create long term value for both the coop & themselves within the existing, admittedly flawed, methodologist structure that has been available since genesis.

There have been some bumps along the way

Like many (maybe most?) members of Index Coop, this is my first time working in and with a DAO.

Reflecting back on the past 3 months building DATA with the Index Coop community, there are lots of things I would have done or said differently. I wish I had been more patient and empathic in multiple instances.

but I think the coop should make good on its signaled intent to launch DATA by Sep 1 & buckle down to rewrite the methodologist incentive structure that we all know is needed for the next phase of growth.

I do have some open questions over Titans of Data’s distribution strategy for DATA, as they don’t have the platform that a DeFi Pulse or Bankless do, and I feel that has flown significantly under the radar given all the other conversations afoot. However, I feel that the product-market fit will be strong enough to generate investor interest as the sector isn’t covered by existing coop products.

Do existing index coop investors want exposure to DATA, but not have it currently? If the answer is yes, DATA will likely be a great success. If it is no, Titans of Data x Index Coop will have their work cut out for them making the product a success. This is one of those questions that I’d love to see growth x analytics team up to explore further @jdcook @LemonadeAlpha especially post launch. growth could do customer outreach & analytics could review onchain data post launch.

I will be voting FOR this proposal, but want to voice my reservations with @kiba, one of DATA’s methodologists.

@kiba’s conduct has been, at times, fairly abrasive and its cost to the morale of Coop folks I work with has left an impression. What is an acceptable level of intensity in forum & discord debates to one person is draining & damaging to others. If we are not attentive to this, good people will leave and talent will follow. We cannot afford a situation where the contributors the Index Coop is left with are those who happen to have the thickest skin.

I will be voting FOR this but do have two concerns.

Other than that, good luck @Thomas_Hepner @Kiba, I hope you’re able to help build some real distribution, and I hope DATA becomes a new, core product in our stable!

for a huge mutual success!

So let’s state this clearly on the record: an off-boarding clause was offered here only because of the unique situation in which we find ourselves. We want to launch this product, but we are in the midst of figuring out what the methodologist program should look like. If we do it right, we’ll only ever be in this position once, and we should only ever offer this clause this one time.

The motivation remains for the Titans team to bail and take the entire streaming fee after benefitting from the brand, product launch, and distribution efforts of the Cooperative. That’s a reality. But it’s also the case that distribution is really hard and a necessary ingredient for the ultimate success of the product. This creates somewhat of a built-in deterrent because this is an area the Cooperative provides considerable value.

I’ve also had some really great conversations with @Thomas_Hepner about how we might be able to re-structure compensation for methodologists in the future. These are just conversations, of course. Anything would need to be voted on, but I bring these conversations up more to highlight that they were reasonable. To me, Thomas wants to solve that and stay. I take him at his word that the team will not be unreasonable in these future conversations. 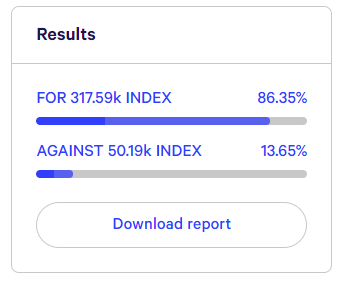 Thank you to everyone in this community who voted for the DATA index and provided support over the past 3 months to get DATA this far!!

I also want to acknowledge the concerns of those who voted AGAINST or raised objections with the proposal. @dylan @ncitron @puniaviision @jdcook @overanalyser @trx314

Specifically, many individuals other than yourselves expressed their reservations, both publicly and privately in other venues, with the off-boarding clause, including those that ultimately voted FOR the proposal.

Your objections and concerns have been heard.

I will work with @jdcook, the methodologist committee (DFP, Bankless, community methodologists, etc. ), and anyone from the broader IC community over the coming months to make sure that the off-boarding clause is never exercised, and that if it is used, it is done so in a way that is minimally disruptive to the Index Cooperative. I sincerely hope we can accomplish this by building a new, stronger foundation between methodologists and the Index Cooperative.

Now the real work begins - cannot wait to make DATA a massive success with this community!!!