We are mindful that a lack of clear progression path for contributors (owl levels) over the past few months has caused some confusion and frustration. Moving into Season 1 with more alignment on overarching objectives and clear objective-focused projects for each Nest, we can now define the S1 Owl Levels, the process we took to set Owl Levels and the new progression and regression framework.

This document is focused specifically toward those contributors nominated by Nests as part of their Season 1 proposal. We will continue to iterate and improve this process throughout the Season with contributor feedback.

Toward the end of last year we hosted a number of Owl Level workshops. The major concerns raised by the community included:

With these concerns top of mind, we’ve designed a bottoms up approach where Nests have proposed the names of contributors as part of their Season 1 proposal. The Index Council then reviewed and approved the proposed Owl Levels as part of each Nests’ proposal. On an ongoing basis, Nests may propose individual changes to Owl Levels. New Bronze Owls, or owl level regression happens at the Nests discretion. Progressions of Gold or Silver Owls are approved by the Index Council.

Given that now each proposal has provided a final list of Owls across all Nests - we are now in a position to move forward with an IIP to expand DSM access to contributors outside of the Priority Hires.

This is by no means a perfect solution. There are tradeoffs. We will continue to iterate on this process and move it toward the most decentralised, transparent, fair and efficient framework possible.

How do contributors progress through the Owl Levels?

Throughout the Season, each Nest can:

Initially, we are proposing that Silver and Gold Owl progressions are reviewed by the Index Council to ensure consistency across Nests. Bronze Owls can be allocated at the Nests discretion. We welcome ideas/suggestions to iterate and improve on this process throughout Season 1.

We had initially planned for each Nest to propose a number of “spare” Owl levels within their Season proposal. This would have given autonomy for Nests to change Owl Levels inflight without the need for further approval. However, we weren’t able to organise all Nests to propose the spare owl levels prior to proposals being published. We intend to develop a more decentralised, nest-driven owl level progression framework throughout Season 1.

Regardless of the method used to progress, regress or assign owl roles, we should be focusing on impact driving the Nest toward its overarching goals and objectives.

What do the different owl levels unlock?

As the DAO grows, we’re looking for more efficient ways to determine levels of trust. Higher owl levels will be given access and logins to the different tools/platforms we use. For example:

By defining the active contributors in Index Coop, it also enables the operations pod to automate the process of tooling access and remove (and not pay for) contributors to have accounts they are no longer actively using.

Compensation, benefits and the DSM

While we don’t want to tie compensation directly to Owl Levels, we are continually seeking a more decentralised alternative to distribute compensation. A single Nest Coordinator determining compensation is both inefficient and leads to unnecessary tension. Higher owl levels should indicate higher impact and context.

In Community Nest, we are using owl levels to decentralise compensation decisions.

Using Coordinape as our compensation tool, each contributor has their $GIVE allocations weighted via Owl Levels. Bronze Owls have 100 $GIVE tokens, Silver 200, Gold 300. This decentralises compensation while ensuring the Owls with the highest levels of context have the highest $GIVE to distribute. More information here.

We are hopeful over time this model may be adopted by other Nests. Moreover, in time we hope Owl Levels can be used to provide contributors with budget for:

Finally, by confirming Owl Levels, we are also hopeful we can expand Dynamic Staking Model access to a wider group of contributors. This would give contributors the ability to earn yield on the $INDEX tokens they hold and incentivise increased retention and greater community ownership. We will seek to take a formal DSM expansion proposal through IIP over the coming weeks.

The Coop is currently experimenting with weighted voting based on Owl Levels to ensure those contributors with the highest levels of context are given a proportional influence on decision making. This forms a rudimentary “reputation based voting” which we expect to evolve over time (i.e. through the use of vote weighted NFTs).

This is the first formal iteration of owl level progression, with the communities feedback and exploration of alternative governance models, we expect our framework for owl levels to evolve over time.

Thanks to @anthonyb.eth for kicking off the first Governance Enhancement workshop today.

How do we ensure owl level consistency across Nests?

While each Nest has the flexibility to determine how they approach owl levels, we do want to ensure we’re maintaining some consistency between Nests. The owl level progression framework shared below is designed to help guide each Nest’s Owl Level allocation, progression and regression decisions within the guardrails of the broader coop.

Having said this, we do understand each Nest is different. We look forward to the development of a number of unique Nest progression manifestos.

How do we approach regression and offboarding?

Not an easy topic. Community Nest and HC pod will be working to develop a more robust regression and offboarding framework over the course of Season 1. Both Nests and the Index Council will have the autonomy to identify and regress owl levels due to ongoing underperformance or misalignment with the team. We are encouraging Nests to decentralize regression where possible. Coordinape is a great tool to help inform this!

Community Nest will again be using Coordinape to facilitate collective regression decisions. Any owls with $GIVE allocations significantly underperforming other owls at the same level will be engaged by the Nest to understand any potential misalignments, unrecognized contributions and opportunities for continued improvements.

Any serious misalignment external to performance concerns (breaches of code of conduct, ongoing conflict) should be approached through the formal offboarding process. This will involve opening lines of communication to understand any potential misalignments, identifying opportunities for rectification of behavior and continued improvements.

How do contributors progress? 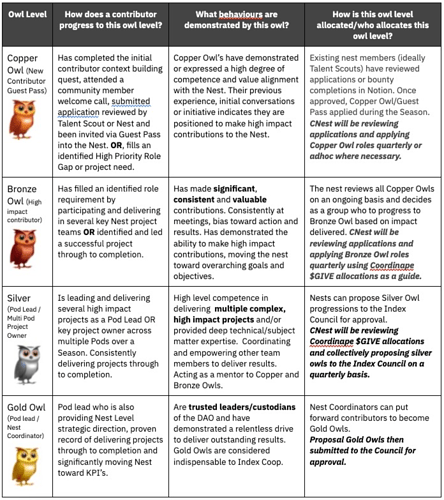 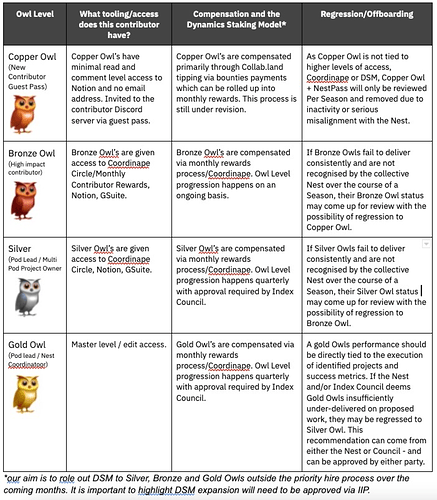 Going forward, Owl Levels will be continually readjusted via the process outlined in this document. To start the process, in Season 1 Owl Levels were set using the following process:

The breakdown for Owl Levels in Season 1 can be seen below:

It is worth highlighting the inclusion of both Gold and Gold+ Owl Levels within the document. Gold and Gold+ owls should be considered broadly identical in regards to their levels of impact and position of trust within the organisation. The “+” indicates that the contributor has been taken through the priority hiring process.

Using the framework above as a guiding template to ensure some consistency, we’d encourage each Nest to think about ways to collectively co-create their own process and pathway for owl level progression if it makes sense to do so. For any bronze owl assignments, CNest can update Discord roles and internal databases, please contact @bradwmorris @0xMitz @coolhorsegirl @kindeagle. For Silver and Bronze Owl progressions, Nest coordinators/Nests can communicate progressions to the Index Council.

We understand this isn’t overly prescriptive or formal, we do expect to optimise the progression path over time once we’ve collected feedback.

Community Nest is available to help with Coordinape implementations.

We welcome feedback, comments or thoughts on the proposed framework - and ideas for how this can be further iterated in Season 1 and beyond would be greatly appreciated.

Nice work outlining this for contributors. Getting more people involved in the DSM is a WIN. Just like to say I would trust @bradwmorris, the authors of this proposal and any number of other people outside of the council to make the right call on owl levels given this comprehensive guide. Owl levels imo #decentraliseddecision

Hey Brad and team, thanks very much for this. I have a conflicting thoughts on this - so starting with my first reaction linking back to my organizational design thinking - What is the right number of contributors at each level? Said another way, organizations get top heavy when star performers turn mediocre (for a variety of reasons) and there is no limiting mechanism curtailing the number of participants at level. How many or what % of the organization needs to be at which level to get the right kind of work done? In a traditional organization, I might think of Gold: 5% Silver: 20% Bronze: 30% Copper: 50% - (but this should be driven based on the right kind of work that needs to be completed, not a pretty pyramid or the caliber of the existing folks)

The other side of my mind tells me that developing owl and target levels is just the recentralization back to the permissioned hierarchies we all know from TradBiz, and we should aspire to better. I admit, I don’t know what that “better” is just yet and its possible it has not yet been invented. Perhaps before we calcify our thinking - we do two things 1) identify alternative models - and why they don’t work for IC and 2) build in an escape hatch which forces us the reevaluate this model compared to what gets invented tomorrow. My fear is that our natural tendencies are going to lead us to reapply what we know and we will not do the hard work required to unlock prosperity for everyone.

In closing, I found this piece compelling and timely:

falling back to hierarchy is like texting ur toxic ex

Thanks @lee0007 , appreciate that. It’s not the perfect framework by any means. Confident it will become more decentralised and efficient over time.

Hey @shawn16400 , thanks for the response, grateful for your hard stance on decentralisation - I’ve booked a time to chat in your cal.

What is the right number of contributors at each level?

I don’t know the answer to this yet and I’m not sure we will find a perfect number. There have been differing opinions on this, each nest is different and there are still too many variables. Deferring the progression decision of Silver and Gold owls to the council is not the ideal outcome, but I believe to keep things in check it’s the best first step.

I share this concern and agree it feels hierarchical. I also read @chasechapman 's article and have been thinking a lot about this. I know there are differing opinions, but I believe Owl Levels are an opportunity for us to implement a healthy and necessary hierarchy which is very different to us defaulting to centralisation.

We have many ideas for progressively making owl levels and progression more decentralised and tools to facilitate this. And if anyone has an alternative structure in mind I would love to explore.

Personal opinion: I would prefer to be part of an organisation with sustainable leadership and hierarchy > progressively pushing further along the decentralisation spectrum and experimenting with other models of org design and leadership than the other way round.

Looking forward to chatting soon in our call

Hi,where can I see the governance and weighted votin related propsal?

Sorry for the late reply @Haux, something coming this week