This proposal would extend the term of the Index Coop Council v2 (ICC) through December 31, 2022 or until a new IIP passes which deprecates the ICC in favor of a new, more permanent system.

The members of ICC v2 anticipate that we will be able to create and implement a new organization structure fairly quickly, however, given that it is not ready and passed through the IIP process, this proposal will serve as a stopgap until that time.

The council has been shown to have been an effective group for moving forward initiatives that benefit the DAO. Without a council or a more permanent solution, the DAO will be vulnerable to slowed momentum.

This proposal solves that issue by instituting a temporary council for the next three months at a maximum.

Personally speaking, I am in favour.

I see the coop is being managed effectively and going in the right direction so I don’t see a need to change at this time.

I’ve been pleased with both the process & performance of the Index Council. I’m in favour of extending.

In favor of this extension

Everyone I have spoken to at Index Coop recently, has only said positive things about the existing council. I support this extension.

I’m also in favor of this extension. I had the privilege of working with this group as a former member of ICC and can attest to their smarts, collaboration, and dedication to the DAO!

Also glad to see a more permanent solution in the future – hope that this sets the org up for long term stability and success.

An IIP has been created: Snapshot 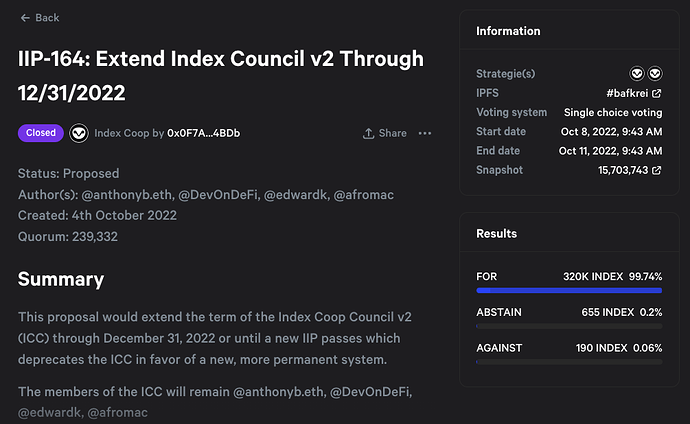