UPDATE: These parameter changes have passed following the 5 day challenge period. There were no challenges.

The council is proposing three parameter changes to the DSM:

The Index Council has the ability to propose parameters changes to the DSM which will alter INDEX distribution. If the Index Council wish to alter the parameters of the DSM, discussion on this will take place publicly for at least 5 days. During this time any individual has the right to “challenge” the proposed changes. In circumstances where there is a challenge, the final decision will be confirmed through IIP - with token holders voting to “approve DSM parameter changes”, OR “do not approve DSM parameter changes”.

To formally object, please post a comment under this post saying “I object to change #x”. Any changes not objected to within five days will be automatically passed. Any changes that are objected to, will go to IIP.

Please do not make broad objections to the DSM in general - these are specific parameter changes to the DSM.

These changes are intended to bring clarity to a very complex system. We believe that providing this clarity early will prevent negative situations and edge cases in the future.

Currently, core contributors leaving Index Coop are incentivized to remain at a 25% time commitment to continue receiving benefits of compensation package such as the fixed equity component and DSM. There is incredible value in incentivizing contributors that leave Index Coop to remain active, but we will look to create a compensation mechanism for these advisory services. The core hire packages are meant for the highest-context and committed contributors.

The DSM was intended to act as so-called “golden handcuffs”. We are seeking to remove the incentive to reduce time commitment to a lower level to maximize DSM rewards while not remaining very active.

Contributors will only receive the DSM proportional to their time commitment in the lesser of the awarded month and the vested month, with the stipulation that both months must be greater than or equal to a 50% time commitment.

The fixed equity component of the compensation package should be proportional to time-commitment. If a core-hire reduces their time from 100% to 50%, they will receive 50% of the fixed equity.

Fixed equity will be subject to a six-month lock and will be disbursed regardless of contributor status. If a contributor resigns or is terminated, they will still receive their fixed equity rewards. It is not “vesting.”

This highlights the distinct difference between fixed equity and the DSM and makes leaving Index Coop a more bearable experience for contributors with core hire packages.

Bob worked as a core hire at 100% in March. In April, he decided to scale back his time commitment to 25%.

Alice worked as a core hire, Gold+ Owl Level, Impact Level 5, and had a 75% time commitment in March. She had an average daily balance of 100 INDEX. 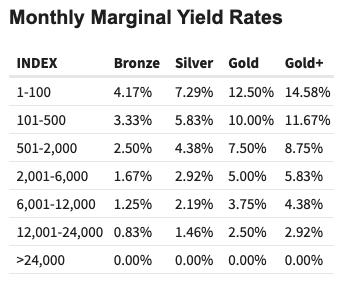 To calculate her DSM and fixed equity rewards, we should calculate the rewards that a full-time core hire would receive and multiply by 75%.

A core hire would have earned 14.58% on their INDEX for the DSM component. Since Alice had 100 INDEX she would earn 14.58 INDEX as a full-time contributor. Because her time commitment was 75% she earns:

Alice’s DSM component vests after six months, so the INDEX awarded in March would vest in September. If Alice scales back her time commitment to 50%, she will earn:

For the fixed equity component, a full-time contributor at Impact Level 5 would earn 375 INDEX per month. Since Alice is only working at 75% time commitment she will earn:

Scenario 3: Jane is at 50% time commitment when her DSM reward is awarded, but it at 25% when it vests. She will earn 0% of the reward.

@anthonyb.eth can I clarify then the incentive is to maintain hours - even if the work is below the rewarded rate.? There were many ways I could have remained busy, even inflated hours. Except coming from a start-up background I prefer to optimise my own and my team’s time for cost-efficiency. With these changes, it appears to me IC is effectively incentivising toward being ‘busy’, as opposed to delivering impact i.e reducing costs? No objection to the change.

Yes, this is true - there is still an incentive to inflate time commitment, but it is much more difficult to inflate to 50% from ~0% than 25% from ~0%. This is a separate issue that will hopefully be addressed soon.

My only concern here is around the inability of a contributor to exert influence in this system or to even know if INDEX considered vesting is going to be paid out (again this is a spreadsheet not a staking contract and there are parameter changes being implemented ahead of the first INDEX being distributed). Further ICC minutes indicate that the DSM may be deprecated in favor of a better system, but without knowing any details it’s hard to know if that’s something I’m inclined to be supportive of.

My overall concern here is that the strength of the DSM is dependent on the confidence of those participating, and my confidence is waning based on actual and unknown forthcoming changes. As it stands I imagine the DSM provides a good amount of INDEX price support and I find the phrasing in the latest ICC minutes concerning. I’d like to hold INDEX confident that the DSM is and will be active moving forward, and while I view the above post as more clarity than change, I’d like some representation that participation in the DSM will in fact disburse INDEX at at-least the agreed levels regardless of future changes.

These changes are not meant to be major changes, just clarifications on some gray areas which were not fully addressed in the IIP. The council will strive to provide maximum clarity as it pertains to any changes to the DSM.

This is helpful; thanks AB.